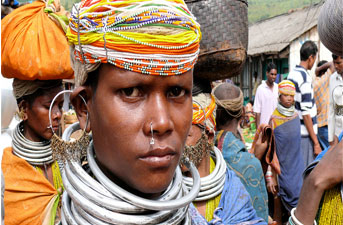 This is a list of indigenous people or scheduled tribes of the Indian state of Odisha (Orissa), as recognized by the Constitution of the Indian Republic; a total of 62 distinct tribes. The term "Scheduled Tribes" refers to specific indigenous peoples whose status is acknowledged to some formal degree by national legislation. 13 out of these 62 tribes include are known as "Particularly Vulnerable Tribal Groups" (PTGs). Officially known as "tribals" or "adibasi" they constitute 22.01% of the state's total population (8,145,081 totally) and 9.7% of the nation's total tribal population.

Tribal economy is subsistence oriented. It is based on food gathering, hunting and fishing and thus revolves around forests. Even the large tribes like the Santal, Munda, Oram and Gond, who are settled agriculrurists, often supplement their economy with hunting and gathering. While farming they make use of a very simple technology and a simple division of labour,often limited to the immediate family. They lose out because their holdings are small and unproductive, lacking irrigation facility since the terrain is hilly and undulating. 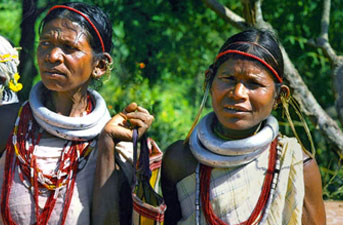 Mnay tribes, for instances, the Juanga, Bhuiyan, Saora, Dharua and Bonda, practice what is called shifting cultivation or Podu Chasa, also known as slash and burn. They select a plot of land and generally on a mountain slope, slash down all the trees and bushes and burn them to ashes. Spreading the ashes evenly over the land, they wait for the rains before planting their crops. Due to cultivation for two or three seasons on one plot of land the soil gets depleted, so the tribal move on. It is a way of life for them. There are cattle-breeders among the tribes, notably the Koya. There are simple artisans too like the Mohali and Loharas, who practice crafts of basket weaving and tool making. A sizeable part of the tribal population of Odisha (Orissa) has moved to the mining and industrial belts of the state, notably the Santals, Munda, Oran and Ho. This has helped ease the pressure on small holdings but in the process tribal villages have been abandoned. Traditional skills, land and other immovable assets have been lost without always bringing in adequate prosperity via jobs in mines and factories.

But if tribal economy is shakly, tribal culture in its pristine state is rich and distinctive and the Adivasis work hard to preserve it. A tribal village manages its internal affairs very smoothly through two institutions - the village council of elders and the youth dormitory.

The core of tribal culture, the youth dormitory, is the largest hut in the village. It has only three walls, profusely decorated with symbols representing animals. The fourth side is open. By night dormitory is home to the youth of the village. But before and after a hard day's work, people gather here to chat and relax. The council of elders meets here too to discuss matters relating to the welfare of the village. The open space in font of the dormitory is where youths and maidens dance with abandon every evening, for tribal culture allows free mixing of the two sexes. Despite their poverty the tribals of Orissa have retained their rich and colourful heritage of dance and music. Every tribal can sing and dance to the sound of pipe and drum and give tune to impromptu compositions that come to him/her as naturally as breathing. 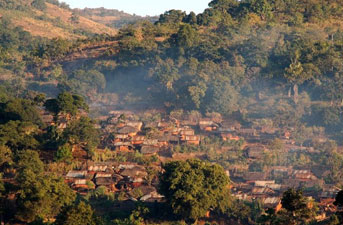 The exceptional Bondas dwell in the remote Bonda hills . The landscape is exhilarating: steep roads climbing up jaded green hill slopes, breathtaking jungle that seem to go for ever as one proceeds along hairpin turns amon tall sal overlooking, brisk, babbling mountain streams, amid a profusion of wild flowers daubing the landscape with startling colors.

The Bonda or Bondo are an ancient tribe of people numbering approximately 5000 who live in the isolated hill regions of the Malkangiri district of southwestern most Orissa, India, near the junction of the three states of Orissa, Chhattisgarh, and Andhra Pradesh. The Bonda are a scheduled tribe of India and are also known as Remo (meaning "people" in the Bonda language).

They are unpredictable in their behaviour, and resent interference. The men are short and stooped from walking up and down the mountain slopes. The woman scantily clad owing to their religious customs with strings of beads and brass ornamental which hang low on their bodies: their head are completely shaven and bound with strips of palmyra or coloured fillets. Rings or buttons made of brassed serve as ear decorations, and they delight in wearing broad bagles of brass on their wrists. What makes the Bondas different from the other tribes of Orissa is the attitude of their men towards violence. Equppied with lethal bows and arrow, the Bonda male will not hesitate to release his arrow straight to the heart of his opponent at the slightest provocation.The tribe still practice the barter system i.e. exchanging the produce of their fields for articles of daily use. An interesting feature of the Bonda marriage is that Bonda girls prefer to marry younger boys. So they may have someone to earn for them in their old age.

The Kondhs, or the Kui as they call themselves are one of the well known tribes and the largest tribal community of Orissa with a population of around 1 million; who were famous in history for their Merial Sacrifice (human sacrifice); practiced no more.

The Kondhas are believed to be from the Proto-Australoid ethnic group. Their native language is Kui, a Dravidian language written with the Oriya script. The Kondha are adept land dwellers exhibiting greater adaptability to the forest environment.Dense sal forests were their playground: they hunt with the ease of all primitive races with bows and axes. The Merial Sacrifice, as it is called , can be looked upon as a part of the universal preoccupation of the primitive mind seeking to propitiate the supernatural powers for the peace and prosperit of the entire tribe. Barbaric,obviously, accordingly to our standards. Not so when one considers that the sacrifice was meant to fertile the earth and the victims's flesh buried in the fileds for the benefit of the entire tribe. They are mostly concentrated in large numbers in Kandhmal(formely Phulbani) , Bolangir, Koraput and Ganjam districts of Orissa.

One sub-group of kondhas is the Dongria Kondhas. They inhabit the plateaus of Niyamgiri hill ranges which cover parts of Rayagada and Koraput and Kalahandi districts. Their major concentration is found in the blocks of Kalyansinghpur, Bissamcuttack and Muniguda. They are called Dongria or dweller of donger ("hill" in Oriya) and love to settle in higher altitudes due to their economic demands. 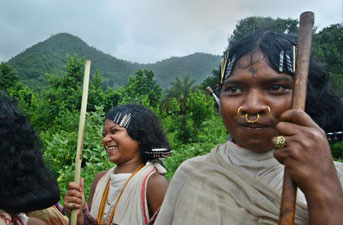 The Niyamgiri Hills where the Dongria Kondh dwell are covered by superb natural forests and home to many rare species like the Golden Gecko and the Giant Squirrel. The Dongria Kondh call themselves Jharnia meaning those who live by the Jharana (streams). Hundreds of perennial streams flow from Niyamgiri hill, and there are hundreds of Dongria villages by the streams. The Dongria are the protectors of these streams, hills and jungles and are revered by people in the nearby plains.

The Gadaba are a primitive tribe classified as Mundari or Kolarian on linguistic grounds. They are one of the early settlers of this country and trace their origin to the time of Ramayana/The word Gadavb signifies a person who carries loads on his shoulders. The tribe call themselves Guthan. They speak a mundari dialect, called Gadaba after tribal name. The Gadabas are a tribe of agriculturists primarily. The Gadabas are also employed as bearers in the hills and carry palanquins. There is a tradition that the tribes owes its name to the fact that its ancestors emigrated from the bank of Godavery river and settled in Nandapur, the former capital of Rajas of Jeypore.Besides Malkangiri this tribe is found in Koraput, Kalahandi, Sundergarh, Gangam, Sampalpur and Boudh Phulbani districts of Orissa.

The Sora (alternative names and spellings include Saora, Soura, Savara and Sabara) are a tribe from Southern Orissa, India.The Souras are second most prominent tribal community in the Rayagada district of Orissa and specific pockets of Koraput and Gajapati Districts. They are also sometimes called Lanjia Souras due to their dress pattern wear a loin cloth hanging from behind & which could be mistakenly identified as a tail by a stranger. Their highest concentration is found in the Puttasingi area, approximately. They are known by various names such as "Savara", "Sabara", "Sora" and "Soura".

Juang (Patuas, literally "leaf-wearers"), a jungle tribe of Orissa, India. They are found in only two of the tributary states, Dhenkanal and Keonjhar, most of them in the latter. They are estimated to amount in all to about 10,000. Their language belongs to the Munda family. They have no traditions which connect them with any other race, and they repudiate all connexion with the Hos or the Santals, declaring themselves the aborigines.They are proficient in basket making, which is in demand in nearby caste villages. The juangs would exchange their baskets for salt, oil ,food, money from the village traders but with increased contact with the Hindu villages they have took up the worship of Hindu Goddess Lakshmi and are slowly being absorbed into the Hindu Caste system as a basket making caste group.

The tribals of Odisha (Orissa) observe a string of festivals. Some are closed affairs, relating to a birth or death within the family or a daughter attaining puberty. Others relate to sowing or harvest time and these involve the entire community. Mostly a festival is an occasion for a good of Mahua liquor, a game roasted on the sprit and a night of song and dance is revelry. But that is not the end, there is an animal sacrifice too, for the deities and sprits must be appeased first, particularly the malevolent ones, so they don't unleash drought or sickness on the land. Tribals are superstitious people and the 'Ojha' occupies a position of honour since he not only prescribes medicines for the sick but is also believed to exorcise evil sprits.

The supernatural also figures prominently in tribal folklore which is a body of largely verbal literary tradition. These simple folktales are linked to occasion in everyday life - sowing, harvesting, birth, marriage and death. Folktales also values dear to the tribal's heart, but many of them offer an explanation for natural phenomenon day and night, thunderstorms, animal behavior. With the tribals living so close to nature, it could not be otherwise.