A land of rich and diverse artistic achievements, Odisha (Orissa) art and culture the products of a long historical process in which the spiritual, philosophical the humane dimensions have merged to yield the finest effects of cultured civilised life.

Culture imparts flavour and animation to the social and religious activities of people. It flows as an under-current of inspiration below the surface of daily and acts as a powerful link in the chain of human fellowship and universal concord. Odisha (Orissa) has a distinct tradition of painting, architecture, sculpture handier music and dance. Artisans are engaged in making articles of decoration required for festival days in temples and households, which has not only provided them their living but also opportunities for artistic expression.

Whether the articles be tie-and-dye textile or applique work, terracotta, lacquer or brassware, filigree ornaments or patta painting of gods, all these have made the daily life of Orissan people artistic and offered them avenues for trade and commerce in other parts of the country and even abroad. 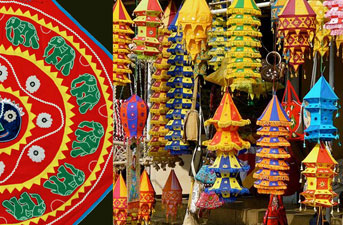 "Applique", a French term, is a technique by which various cutting pieces of coloured fabrics are applied to the surface of another foundation fabric.This thread of creativity runs in the village of Pipili (20 kms from Bhubaneswar) where a vibrant community of craftsmen specialises inapplique craft. In fact, the village owes its existence to this craft.

Applique works of Pipili is also known as patching cloth design and in local language this handicraft is known as 'Chandua'. The villagers are involved in the process of cutting coloured cloth into shapes of animals, birds, flowers, leaves, gods, goddesses and other decorative motifs and stitching them over a piece of cloth. These creations are then fabricated into lampshades, handbags, cushion covers or even garden umbrellas. 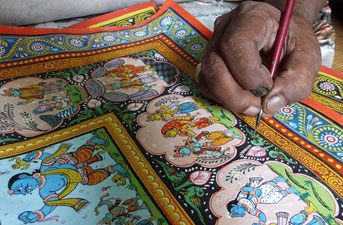 PattaChitra is a miniature painting which is executed on a small strip of cotton cloth.The subject matter of Patta paintings is limited to religious themes. The stories of Rama and Krishna are usually depicted on the pattas. "Rasa Lila", "Vastra Haran", "Kaliya Dalan" are some of the recurring themes of Patta art. They are painted with bright colours and possess a charm peculiarity of their own. Their pictorial conceptions, their unique painting technique and line formations together with colour schemes make them a remarkably original art form. Chitrakar-traditional painters in and around Puri practice this living art form. The village of Raghurajpur is where many Chitrakars live in an area dedicated to them called Chitrakar Sahe distinct from any other school of painting either in or outside India. 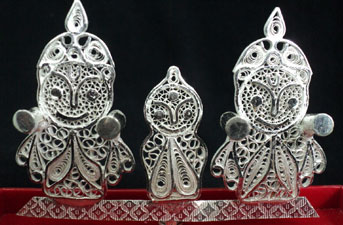 Silverware of Odisha (Orissa) is very widely known. Her Filigree works particularly are unique examples of artistic excellence rarely to be seen in any other part of India. Silver wires, extremely delicate, are shaped into intricate designs. Forms of animals and birds, articles of daily use like vermilion receptacles are also made out of silver wires- Filigree ornaments, especially brooches and earrings are very popular among Indian women. Cuttack also known as "Silver City" (25 kms from Bhubaneswar) is the haven for filigree work. Scenes from the Mahabharat are sometimes depicted in silver in particular interest is the chariot of Arjuna driven by Lord Krishna done in silver. 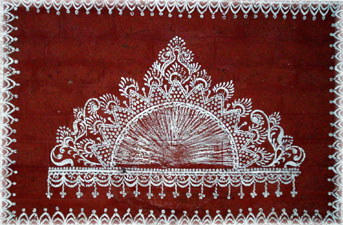 The folk art of Odisha (Orissa) is bound up with its social and religious activities. In the month of Margasira, women folk worship the goddess Lakshmi. It is the harvest season when grain is thrashed and stored. During this auspicious occasion, the mud walls and floors are decorated with murals in white rice paste or pithau. They are called jhoti or chita and are drawn not merely with the intention of decorating the house, but to establish a relationship between the mystical and the material, thus being highly symbolical and meaningful.

To draw a jhoti or chita, the fingers are dipped into the rice paste and made to trace out intricate patterns on the floor or walls. Sometimes a kind of brush is prepared from a twig to one end of which a small piece of cloth is attached. This is dipped into the white rice paste to draw patterns on the wall. At times, the paste is sprinkled on the walls with delicate swishes of demist, and a pattern resembling bunches of paddy emerges on the wall. 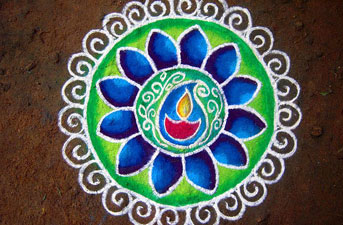 Muruja is generally used during rituals in the forms of mandalas. In the holy month of Kartik (November) women observe penance and draw muruja designs near the tulsi plant.It is drawn on the floor with powders of different hues. White powder is obtained from the grinding of stones, green powder is obtained from dry leaves, black from burnt coconut shells, yellow from the petals of marigold flowers or turmeric, and red from red clay or bricks. 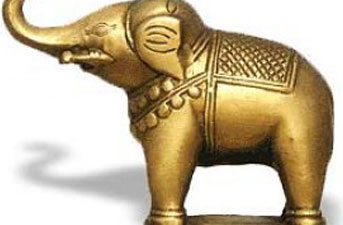 The fine engravings on brass and bellmetal utensils, bronze bangles and pots are important aspects of Orissan art. Artefacts made of metal, particolarly brass, find pride of place in the homes of Odisha (Orissa). Beautiful lamps and lamp-stands are used during the worship of deities. Rice-measuring bowls made of brass are used in many homes. The artisans also make elephants and horses from brass and decorate them with intricate designs. The brassware of Odisha (Orissa) reveals the high workmanship of the artisans and their flair for innovation. 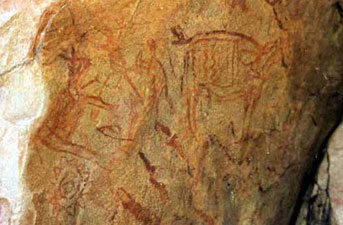 Painted rock shelters are situated in the densely wooded tracts of Western Odisha (Orissa). The rock shelters at Ulapgarh and Vikram Khol in Sambalpur district, Manikmada and Ushakothi in Sundargarh district, Gudahandi and Yogimatha in Kalahandi district, offer the joy of discovering a primitive culture, rare in the whole of Eastern India. There are natural rocks in these areas covered with prehistoric paintings. The pigments used by the rock painters are oxides of iron which give the colours red and brown; white is derived from lime and green from copper compounds. These colours are mostly available near the rock shelters. Obviously these paintings have been done by primitive men, the ancestors of the tribals of Central India and Western Odisha (Orissa).

Sarees and other Fabrics 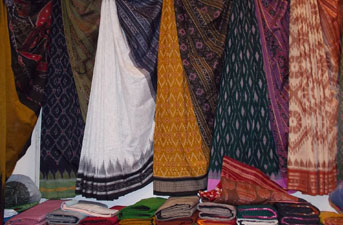 Perhaps the most popular item in Orissan handicrafts is the handloom saree. The sarees come in a variety of designs and colours to suit every taste and pocket. Generally the villagers in Sambalpur district weave the sarees on looms Sambalpuri cotton saris have a smooth finish and have a distinctly original border and pallu. Fish, conch shell and flower motifs are woven into the fabric. Sometimes animal motifs are also used to decorate the borders and pallu.

Ikat -The technique of ikat is the tie and dye process which has trickled down from the Indonesian culture. Although Odisha (Orissa) has adopted this process yet it has its own style and traditional designs. In ikat method the yarn is subject to tying in sequences and dyeing the required areas in the required color. This technique is quite different from the methodology adopted in States like Gujarat and Rajasthan. In Odisha (Orissa), by this method the dye soaks into the exposed portions and the tied portioned are left from the dyeing effect. As a result, you have a systematic sequence in the yarn which is put to weaving. This sequence is a preconceived design of the weaver. This sequential tie and dye method allows the weaver to form the designs in various colors.

The ikat design of Odisha (Orissa) is generally flowery patterns but also have designs of animals, fish conch, etc. Cotton ikat saris normally come with geometrical outline but the trendy motif in ikat saris are the elephants, deer, parrot, nabagunjara, lotus and other flowers, stars and creepers. These motifs are found in cotton as well as silk ikat saris. Almost all the handloom saris have an affinity to the Jagannath Dham culture. 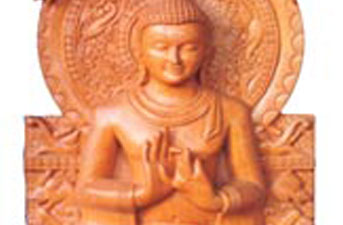 Stone carving is an age-old craft of Odisha (Orissa). The descendants of the artisans who once scaled the dizzy heights of excellence in temple building have kept the sculptural tradition alive through their hereditary craft of stone carving. The carved products include replicas of temples, images of gods and goddesses, the Konark wheel and horse, and decorative figurines.

Wood carvings of Odisha (Orissa) are almost equally popular. They differ from the artifacts of other states in so far as they are plain and shining with smooth polish and without any paint or coating of lacquer work on them. 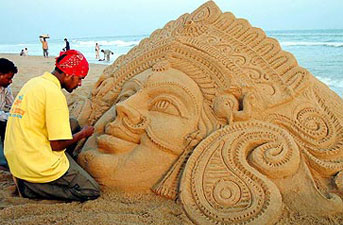 Although not historically proved , there is an interesting story in the Orissan myths regarding the origin of sand sculpture. A poet named Balaram Das was denied by the priests to climb the chariot of Lord Jagannath during Rath Yatra.With a great frustration and humiliation he came to the beach and carved the statues of Lord Jagannath , Lord Balabhadra and Devi Subhadra on the Golden sand . Then there he started praying and worshipping these statues . His devotion was so strong and deep that the original statues vanished from the chariot and appeared at that place where Balaram das was worshiped.This phenomenon might have marked the beginning of sand art.

To carve a sand sculpture , the raw material is the only clean and fine grained sand mixed with water . There are very few people who leave their foot prints on sands. One of them is Sudarsan Pattnaik. His magic fingers, with unlimited dedication and immense passion to create beautiful and attractive sculpture on the beach leave many people awestruck. He has now becoe an international artist and imparts his training skills to young artists.

Apart from these Odisha (Orissa) has many other items of handicraft such as terracotta,pottery,golden grass and cane works,horn works,paper mache, sola pith work, lacquer work, zari work, glass beads, cloth garlands, jute carpets, and above all the, sea shell works undertaken in Puri and Gopalpur.