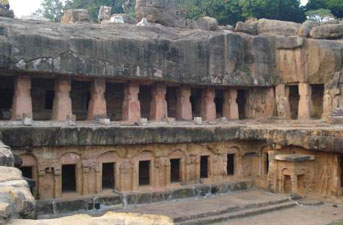 The exhibits of the newly renovated section are mainly of sculptures ranging from the third century B. C. to the late medieval period, displayed in three big halls on well-designed pedestals under both natural and artificial lighting conditions. The portion of an Asokan pillar brought from Patna Museum, has been regarded as the earliest specimen of the section. The heavy and crude Naga and Yaksha images collected from the surrounding area of Bhubaneswar comes next. Among other notable sculptures the Buddha image of Khadipada, Amoghasidhi of G. Udayagiri, Lokanatha from Bhubaneswar, Jaina Tirthankaras from Podasingidi and Charampa, Brahmanical figures like Sapta Matrukas from Dharmasala, Dikpala figures from Bhubaneswar, Krishna-Vishnu from Dharmasala and a number of Puranic panels and Gopinath images from different parts of the State. A brief account of each school of sculptures is given below. 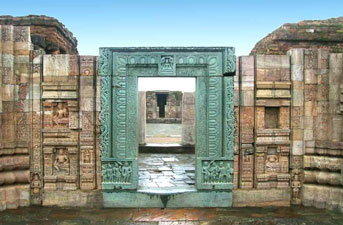 Like Buddhist and Brahmanical sculptures, the State of Odisha (Orissa) was once rich in Jaina antiquities. We have traces of those relics seen in Jeypore and Nandapur of Koraput district: Bhubaneswar, Puri, Kakatpur in Puri district; Cuttack town, Pratapnagari, Chaudwar, Tigiria, Jajpur of Cuttack district; Anandapur area of Keonjhar district; Charampa, Ayodhya, Martasol of Balasore district and Khiching, Baripada. Badasahi of Mayurbhanj district.

Podasingidi is an important archaeological site in the dense forest of the Baula hill ranges in Anandapur Subdivision of Keonjhar district. Out of many, only two Risabhanath sculptures have been brought from the site and they are now under display in the first hall of the Archaeological gallery.

Charampa (Bhadrak) in Balasore district also yielded a large number of Jaina antiquities of which four have been brought to the Odisha (Orissa) State Museum for display. A peculiar feature of these images is that a number of cut marks are found on their body. These cut marks are certainly a deviation from the other school of Jaina art as if those were purposely effected by the artists.

The figure of Santinatha is also seated in padmasana in meditative mood. The cognizance mark, the deer is placed below the double petalled lotus pedestal duly flanked by devotees. The pedestal is supported by lions.thauri-bearers and flying Gandharvas flank the figure at the bottom and top respectively, like the above its hair is also arranged in locks.

The fourth figure is often regarded as Mahavira, the 26th Tirthankara of the Jainas in view of the fact that its symbol lion is represented below the pedestal. It stands in Kayotsarga pose on a double-petalled lotus pedestal duly flanked by Chauri bearers close to the pedestal and flying Gandharvas with garlands in hands at the top. The face of the figure is badly damaged. The stele has an oval halo and the Kevala tree is traced at its usual place.

Buddhism in Odisha (Orissa) is a subject of absorbing interest as the contribution of Odisha (Orissa) to the domain of Buddhist culture over the ages is unfathomable. The great Kalinga war that transformed the Chandasoka' to 'Dharmasoka' has brought about remarkable changes in the history of Buddhism resulting in erection of monasteris, stupas, Viharas and Mahaviharas and other relics associated with this great religion.

The front portion of a colossal lion that displayed in the entrance hall of the Museum building was dug out of a pit about 40 feet from northern door of the Bhaskaresvara temple where it had been buried with four pieces of stones on four sides of it. Its weather-beaten surface, that visible above the ground clearly reveals that it is made of coarse grained sand stone, a material commonly found at the vicinity of Bhubaneswar.

Portion of an Asokan pillar

This fragment of an Asokan pillar was brought from Pataliputra (modern Patna) and now displayed in the first hall of the Archaeology Gallery. Highly polished, tall and tapering and well-proportioned columns were erected at convenient places of his empire in order to propagate the tenets of Buddhism among the mass. These pillars are made of Chunar sandstone which is famous for its lusturous polish.

The Buddha in Bhumisparsa mudra consists of mainly three separate blocks (at present broken into four parts), but it reveals a great success of plastic art with broad shoulders, long and round hands, smooth and fleshy chins. It has pronounced solidarity and weight. Unfortunately the left hand and the face are broken.

The Mahayanists consider him to be one of the greatest of the Boddhisativas. They believe that the worship of Manjusri confers upon them wisdom, retentive memory, intelligence and eloquence and enables them to master over many sacred scriptures. The bust of the figure is represented here with both hands in Dharma chakra pravartana mudra.

Among the Brahmanical sculptures the attention of the visitors is mainly dragged to the group of Mother Goddesses, Gopinathas and the Dikpala figures. Apart from them a series of other sculptures like Ganesh, Parvati, Mahisamardini Durga, Vishnu, Kartikeya, Narasimha, Surya and a set of puranic sculptures often attract the attention f the common visitors. The sculptures have been collected from different areas of Odisha (Orissa)

Archaeological wing of the State Museum is singularity fortunate in having a series of Gopinatha sculptures collected from Dharmasala, Binjharpur, Pubasasana and other places of the State. They broadly display the iconographic features of Krishna and are normally found in the entire coastal belt of Odisha (Orissa) from Remuna in Balasore to Puri. The images of Gopinatha otherwise known as Khirochora Gopinath at Remuna and Madan Mohana elsewhare are strikingly noteworthy.

Vishnu brought from Dharmasala and under display along side the Gapinatha group yet is one of the unique acquisitions of the Odisha State Museum. Two such mages have been reported from Puri town ;Jagannatha Ballava Motha and Sadbhuja Galiranga Matha).

Another priceless treasure of Orissan sculptures is a group of Dikpala figures recovered from a place near Rajarani temple of Bhubaneswar while digging foundation for a building. The place was carefully excavated during the year 1967 and 14 sculptured figures including the eight Dikpolas were brought to the museum for proper preservation and display.

The two Uma - Mahesvara images acquired on the 6th August 1975 were recovered from debris in the compound of the present Bhavani-Sankar temple of Bhubaneswar sometime back. They were perhaps parts of the old temple partially visible under ground in the same premises. Of the two figures, one is some how in good state of preservation and the other is damaged from the middle and the upper part is missing