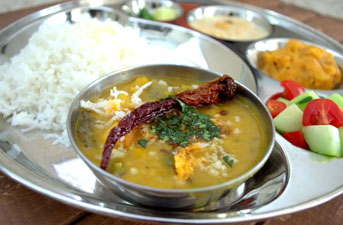 Compared to other regional Indian cuisines, Odia cuisine uses relatively less oil and is less spicy but of great taste. Rice is the staple food of this region. Mustard oil is used in several dishes as the cooking medium, but ghee is preferred in temples. In old times Food was traditionally served on disposable plates made of sal leaves.

Odia cooks, particular from the Puri region, were much sought after due to their ability to cook food in accordance to the Hindu scriptures. During the 19th century, many Odia cooks were employed in Bengal and they took several dishes with them.Yoghurt is also used in various dishes. Many sweets of the region are based on Chhena (cheese).The period saw a heavy demand of the Brahmin cooks, leading many Odia cooks to fake their castes.

The ingredients used in Odia cuisine typical to the region are plantains, jackfruit, and papaya. The curries are also garnished with dried raw mango (ambula) and tamarind. Coconut is also used in several dishes. Panch phutana is a blend of five spices which is widely used in Odia cuisine. It contains mustard, cumin, fenugreek, aniseed and kalonji. Garlic and onion are also used, but is avoided in temple regions. Turmeric and red chillies are also commonly used. 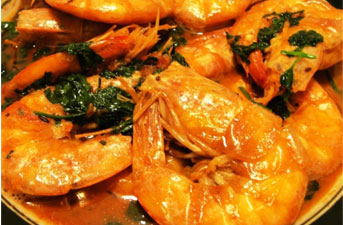 The food in the region around Puri-Cuttack is greatly influenced by the Jagannath Temple. On the other hand, kalonji and mustard paste is used mostly in the region bordering Bengal and curries tend to be sweeter. In the region closer to Andhra Pradesh, curry tree leaves and tamarind are used more.The Brahmapur region has influences of South Indian cuisine and the Telugu people living there have also invented new Oriya dishes.

The culinary heritage of Odisha is inextricably intertwined with the largest kitchen in the world at Jagannath temple in Puri. Mahaprasad , renowned the world over for its taste and combinations, is a must on all auspicious occasions, festivals and celebrations. Infact the Prasad of almost all temples of Odisha feature the tastiest dishes. Like everything else, modernizing influences have also seeped into our food habits. But there is also an attempt at reviving some of the lost odia dishes, as most of them have inherent health benefits.

Abadha, the afternoon meal of the Jagannath Temple served on a plantain leaf.

Various temples in region make their own offerings to the presiding deities. The prasada of the Jagannath Temple is well known and is specifically called "Maha Prasad" meaning greatest of all prasadas. It consists of 56 recipes, so it called chhapan bhoga. It is based on the legend that Krishna missed his 8 meals for 7 days while trying to save a village from a storm holding up the Govardhan hill as a shelter.

Fish and other sea foods are eaten in mainly coastal areas. Several curries are prepared from prawn and lobster with spices.Freshwater fish is also available from rivers and irrigation canals.

Pithas are a type of traditional Odia dishes

Fish and other sea food

India has a rich culinary heritage and is internationally famous for the amazing variety that it offers for the palate. Regional diversity in food gives rise to traditional as well as newer treats that have always been tempting and pampering for our taste buds.

Odisha, previously known as Orissa, is one such state that is traditionally famous for its mouth watering delicacies throughout the past centuries. The coastal state boasts of a huge menu that spans over different varieties of rice, lentils, desserts and sea food. Jagannath Temple in Puri is internationally famous for running the largest kitchen in the world. The Prasada (communion) is cooked on chulas and served to over 10,000 worshippers daily. Based on popularity, some of the most preferred Oriya dishes are:

Khechadi is a well-known dish which is offered as Prasada to the almighty deity Lord Jagannath in the Jagannath temple. It is made by cooking rice and lentils together in ghee that gives it a rich flavour. The rice and lentils are first soaked and then steamed together to the desired consistency. It is then garnished with appropriate enhancing spices fried in ghee. The dish is simple, filling and satiates the taste buds with its distinct flavour. The Khechadi is basically the Oriya version of the Indian "Khichdi".

Dalma is a very popular vegetarian recipe in which lentils and vegetables are boiled together and garnished with aromatic spices. Toor dal is the most commonly used lentil. Vegetables used may be Pumpkin, gourd, green papaya, drum sticks, unripe banana and banana stem, locally called as manja. The flavour is further spiced up by frying with panch phutana (a mix of mustard, cumin, kalonji, aniseed and fenugreek) and turmeric. It came out as a signature dish when it was chosen by former Indian President Dr. A.P.J. Abdul Kalam to be merged in the President's House menu.

Odisha has a vast coast line along the Bay of Bengal and also has many rivers flowing within the region. Owing to this proximity, its sea cuisine is an inevitable part of Oriya diet and majority of its population prefers non vegetarian food. Out of the many varieties in the sea food platter, Chungdi Malai tarkari is a lip smacking non vegetarian dish. It is basically a creamy prawn curry that gets its rich goodness with coconut milk that gives it a distinct flavour. Its taste is further enhanced by treating the curry with simple and mild spices that make the prawn curry a very popular local dish. Teamed up with fresh steamed Basmati rice, Chungdi Malai is a delicious finger licking Odisha speciality.

Pithas are an important part of the traditional food served in Odisha. No festivities or major celebrations can do without serving this traditional Sweet. Usually these are made at home during religious festivals and also served in local roadside stalls with other famous Oriya desserts like the Rasagolla. A Pitha is essentially a country cake. Most common variants that are usually indispensable in an Oriya cuisine are Chhena poda Pitha, Enduri Pitha and Chittau Pitha. The famous Chhena Poda Pitha is made up by caramelizing chhena (well kneaded homemade cottage cheese) with the richness of dry fruits like cashew nuts and raisins. The burnt cheese taste makes this dish a one of a kind dessert in Odisha. Enduri Pitha consists of soaked rice and blackgram dal batter that is filled with a coconut, sugar and cheese stuffing and steamed in a turmeric leaf. Similarly, Chittau Pitha is a steamed rice and coconut delicacy with a sweet cardamom flavour.

Oriyas are well known for their sweet tooth. Their fondness for sweets is usually seen in a typical Oriya Thali, where it is not uncommon to have more than one sweet dish along with the main course. Malpua is a mouth-watering dish, also served to Lord Jagannath in his Sakala Dhupa (Morning Food). Though many varieties of Malpua are cooked in various states, a typical Odisha Malpua is a sweet pancake prepared by making a batter of coconut, crushed ripe bananas, flour with milk or water and seasoned with cardamoms. These pancakes are then fried and served hot.

Odisha gives a rich culinary experience when one experiments with its traditional and contemporary dishes which are healthy, diversified and tempting for the taste buds. Both beginners and advanced cooking experts can definitely try Odisha dishes in their kitchen in their own unique style.